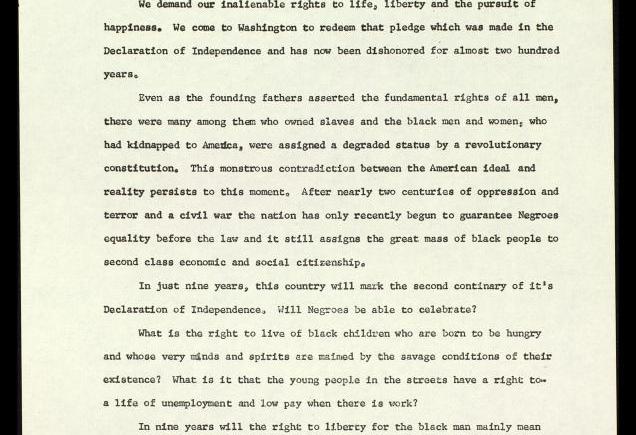 ‘No one is free until we are all free!’

Fifty years on, we mark the death of Dr. Martin Luther King with a renewed international call for an end to poverty, racism and militarism in our lifetime and, linked to this, the re-envisioning of his Economic Bill of Rights for all.

[Statement and Endorsements  here. We welcome new signatories. If you would like to sign on, please email deborah@tippingpointnorthsouth.org]

Background to our MLK GLOBAL Statement

“We are caught in an inescapable network of mutuality, tied in a single garment of destiny. Whatever affects one directly, affects all indirectly”

“We must recognize that we can’t solve our problem now until there is a radical redistribution of economic and political power… this means a revolution of values and other things. We must see now that the evils of racism, economic exploitation and militarism are all tied together… you can’t really get rid of one without getting rid of the others…’’

#MLK Global project believes we need to finish what Dr. King started in 1967/68. Martin Luther King’s vision was, inevitably, both domestic and international. It spoke to the present as well as the future. His writings, his speeches, his activism, his ‘bearing witness’ can be transplanted to the here and now – his vision remains contemporary, universal, unifying and global.  To read Dr. King’s structural analysis of race, economy and war–and the solutions he offers – is to read a wholly accurate analysis of the state of our world in 2018.

Today, the world spends just under $2trillion p/a on military spending before incurring the actual costs of war. Rich-world foreign and military policies are designed to accrue profits to their defence and arms industries.  The USA, UK and many other rich nations are more unequal now than in the 19th century, let alone the 1960’s of Dr. King’s time. The world’s richest 85 people have a combined wealth of £1trillion, as much as the poorest 3.5 billion of the world’s population, while  69 out of the world’s top 100 economies are corporations, delivering them unprecedented political as well as economic power and influence. Racism has not been purged from our societies. People of colour are subjected to police brutality, police murder and suffer massive incarceration rates while suffering gross disparities in income, education, employment, military service, housing and health care. Around the world, far right political parties are gaining ground and membership year on year.

Today, as in 1968, these triple evils are as interconnected as ever

MLK Global calls out the fatal intertwining of the global financial, socio-economic, climate and ecological crises which have resulted in the suffering of millions upon millions of people across our world struggling for a decent life. A struggle often caused, or made worse, by war and conflict. Wars and conflicts often linked to rich-world foreign and military policies. MLK Global calls out market deregulation and unrestrained privatisation of goods and services that exploit whole societies and dismantle social programs and services. MLK Global out uncontrolled financial flows that destabilise the economies of an increasing number of countries all over the world.

“We must rapidly begin … the shift from a thing-oriented society to a person-oriented society. When machines and computers, profit motives and property rights, are considered more important than people, the giant triplets of racism, extreme materialism and militarism are incapable of being conquered.’’

“I imagine you already know that I am much more socialistic in my economic theory than capitalistic… [Capitalism] started out with a noble and high motive… but like most human systems it fell victim to the very thing it was revolting against. So today capitalism has out-lived its usefulness.” – Letter to Coretta Scott, July 18, 1952.

On 4 April 1968, Dr. Martin Luther King was taken from the world by an assassin’s bullet. Dr. King was not only the leader of the civil rights movement, but had become a leading – and dangerous – outspoken voice against the Vietnam war as well as the failure of capitalism to deliver an equitable society.  By 1967,  his ‘Economic Bill of Rights’ was taking shape – a set of radical demands that was to accompany the Poor Peoples’ Campaign, ‘his last great exertion’,  planned for July 1968. The Poor People’s Campaign was the call for a mass movement to camp out in Washington until those demands were met and its Committee of 100  cut across race and class and included leaders from the Latino and Native American communities.  As Dr King wrote to labor leader Cesar Chavez, “our separate struggles are really one.”

By 1968, Dr.King was pushing for something much more radical than’ the dream’ of 1963. The first demand of the Economic Bill of Rights was a minimum guaranteed income. This at a time when the USA war-spending was out of control. Today, this visionary and brave call would be described as Universal Basic Income.

The solution to poverty is to abolish it directly by a now widely discussed measure: the guaranteed income. … We are likely to find that the problems of housing and education, instead of preceding the elimination of poverty, will themselves be affected if poverty is first abolished.

A host of positive psychological changes inevitably will result from widespread economic security. The dignity of the individual will flourish when the decisions concerning his life are in his hands, when he has the assurance that his income is stable and certain, and when he knows that he has the means to seek self-improvement. There is nothing except short-sightedness to prevent us from guaranteeing an annual minimum – and liveable – income for every American family. The time has come for us to civilize ourselves by the total, direct and immediate abolition of poverty.

The Economic Bill of Rights for today

The Global South and economically marginalized people in the North are increasingly aware of the need to organize, advocate and agitate and advance a vision of economic equality such as Dr. King proposed.

MLK Global will advocate internationally for the recognition and take-up of MLK’s original Economic Bill of Rights, revisited for today. It offers a universal, international framework within which to address King’s ‘triple evils’; his desire for a profound re-shaping of capitalist society, the rejection of all forms of racism and the urgent need to rein in militarism.

We need his universal economic bill of rights for all and fit for the 21st century that will reverse economic inequalities, racism, militarism and climate change – factors which combined, are destroying families, communities, nations and the very planet we live on.

It is our sincere hope, that were Dr. King alive today, he would see this project as our way of expressing our indebtedness to his vision and to his courage,  and a deep desire to keep his radical vision alive, internationalised and, ultimately, implemented.

In solidarity with the #MLK Global call for ‘an end to racism, economic exploitation and militarism in our lifetime’ and its efforts to share and promote Dr. Martin Luther King’s Economic Bill of Rights, first declared in 1968, and re-envisioned for today. We support this effort launched on the 50th anniversary of Dr. King’s assassination.

About AN ECONOMIC BILL OF RIGHTS FOR 21ST CENTURY

Today, an Economic Bill of Rights and the realization of a Beloved Community is at the essence of Dr. King’s prophetic, Urgency of Now. Globalization has fuelled a level of inequality the world has never before seen. The poor has become poorer and the rich has grown richer. The “radical redistribution of power” is a moral imperative if we are to ever truly fulfil the Dr. King’s vision.

Despite the intervening decades, it is true to say that Dr King would recognise the same issues today as he faced then – inequality, corporate power, racism and militarism. Now, we have other factors that also need to be incorporated – climate change, the total capture and consolidation of political power by the financial and business class; the globalisation of the neo-liberal agenda (north and south alike).

Dr. King and the Committee of 100 devised an ambitious Economic Bill of Rights that would go to the heart of the inequality dividing the have and have-nots in American society.   We have expanded the original five to add five more to take account of some of the major issues that have emerged in the intervening 50 years.

From 1968 The original five demands stand the test of time. Minimum Guaranteed Income; security for those who cannot work, access to land, to banking, and a meaningful role in government. To 2018 We add five new calls. Climate justice; reversal of the power of trans-national corporations; challenge the global ‘aid’ narrative and instead call for global economic justice; end the so-called war on drugs; and find a framework within which to drastically and sustainably cut runaway military spending

Organizing a global campaign for economic fairness and justice is the first step toward the realization of Dr. King’s dream by amassing  and  awakening the dormant power of the seemingly powerless peoples of the world to call for radical re-imagination of the world’s economic systems, the rebuilding of communities rooted is agape love and the reconstruction of society guided the “revolution of values” that recognizes, uplifts  and advocates  for the principles and policies outlined in the 1968 Economic Bills of Rights.

“These are revolutionary times. All over the globe men are revolting against old systems of exploitation and oppression, and out of the wounds of a frail world, new systems of justice and equality are being born. The shirtless and barefoot people of the land are rising up as never before. The people who sat in darkness have seen a great light. We in the West must support these revolutions.

Our only hope today lies in our ability to recapture the revolutionary spirit and go out into a sometimes hostile world declaring eternal hostility to poverty, racism, and militarism.

A genuine revolution of values means in the final analysis that our loyalties must become ecumenical rather than sectional. Every nation must now develop an overriding loyalty to mankind as a whole in order to preserve the best in their individual societies.

This call for a worldwide fellowship that lifts neighborly concern beyond one’s tribe, race, class, and nation is in reality a call for an all-embracing and unconditional love for all mankind.”